The first line of Hip Hop duo Gang Starr’s “Code of the Streets” is a perfect vernacular expression of the thesis premise of Anderson’s Code of the Street.  Its next three lines capture the world experienced by “the young ones” shaped by that ethos…

Take this for example young brothers want rep
Cause in the life they’re living, you can’t half step
It starts with the young ones doing crime for fun
And if you ain’t down, you’ll get played out son 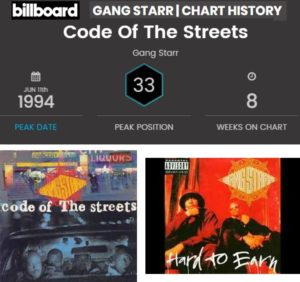 The rest of the lyrics serve well as ethnographic data illustrating the mindset of a Code of the Street-shaped adolescent living in the kind of “hood” which gave rise to the Code.

Take this for example young brothers want rep
Cause in the life they’re living, you can’t half step
It starts with the young ones doing crime for fun
And if you ain’t down, you’ll get played out son
So let’s get a car, you know, a fly whip
Get a dent, pull a screwdriver, and be off quick
With a dope ride, yeah, and a rowdy crew
We can bag us a Benz and an Audi, too
Even a jeep or a van, goddamn, we’re getting ours, yo
Take a trip up the strip, and be like stars so
It doesn’t matter if the cops be scoping
They can’t do jack, that’s why a young brother’s open
To do anything, anywhere, anyplace
Buckwild in another court case
It’s the code of the streets
They might say we’re a menace to society
But at the same time I say “Why is it me?”
Am I the target, for destruction?
What about the system, and total corruption?
I can’t work at no fast-food joint
I got some talent, so don’t you get my point?
I’ll organize some brothers and get some crazy loot
Selling D-R-U-G-S and clocking dollars, troop
Cause the phat dough, yo, that suits me fine
I gotta have it so I can leave behind
The mad poverty, never having always needing
If a sucker steps up, then I leave him bleeding
I gotta get mine, I can’t take no shorts
And while I’m selling, here’s a flash report
Organized crime, they get theirs on the down low
Here’s the ticket, wanna bet on a horse show?
You gotta be a pro, do what you know
When you’re dealing with the code of the streets
Nine times out of ten I win, with the skills I be weilding
Got the tec one dealing, let me express my feelings
Guru has never been one to play a big shot
It’s just the styles I got that keep my mic hot
Anf fuck turning my back to the street scene
It gives me energy, so Imma keep fiends
Coming, just to get what I’m selling
Maybe criminal or felon dropping gems on your melon
So keep abreast to the GangStarr conquest
Underground ruffnecks, pounds of respect
I’ve never been afraid to let loose my speech
My brothers know I kick the code of the streets
Songwriters: Robert L. Russell / Keith Elam / Chris E. Martin
Code of the Streets lyrics © EMI Music Publishing, Universal Music Publishing Group, The Royalty Network Inc.